The vacuum pump is another important tool, without which professional results are impossible. If a system is only open to atmospheric pressure for a short period of time, a method called purging the system is used. This method uses the refrigerant itself to displace any air that might be in the system. The refrigerant being heavier than air displaces air. If a system has been open to the atmosphere for a long time, purging will not be satisfactory. It is in this situation that an efficient vacuum pump must be used. Purging is the introduction of refrigerant through the suction side of the system, letting it exit at the high side of the compressor. The refrigerant should be allowed to flow long enough for the air within to be driven out by the refrigerant.

The service manifold and gauges are hooked to the vacuum pump by the center hose on the manifold. The low-side hose hooks to the low-side of the system, and the high-side hose to the high-side of the system. The system should not have any pressure in it when the vacuum pump is being hooked to it. Any pressure in the system can cause the removal of oil from the vacuum pump. The low-side gauge should show pressure dropping a short time after the pump pressure is 70 psi. If you look to the right side of the chart, you will see temperature scales in degrees F. The lines that fall from the left of the numbers are the reference lines. Looking down diagonally to the left until the line intersects the 70-psi line. You can see that this intersection takes place on the 40-degree line. This should be the actual temperature of the suction line at the compressor. This temperature is measured with a thermometer. If suction temperature is higher than the reading, refrigerant should be added. If suction temperature is lower than the reading, some of the charge should be removed from the unit. In Table 26-1 a graph chart is used. Another manufacturer uses a charging chart as shown in Table 26-2.

The charging by feel method is fast becoming a thing of the past. It can be done by a technician with a lot of experience with a specific in the system. The bad feature about the sight glass is that an inexperienced technician can overcharge a system trying to clear the bubbles or a flash from the sight glass. Those technicians learned incorrectly to charge a system until the sight glass is clear. If an ammeter was used during a load test, excess current would be apparent. If a system has’a restriction in its filter drier, bubbles or flashing can occur in the sight glass. If a heat load is placed on a system, and it is operating at a temperature higher than its design temperature, flashing in the sight glass will occur. Example: you are checking the condensing unit of a 40-foot by 60-foot by 15-foot walk-in cooler. The sight glass is flashing. Unbeknown to you, the local beer vendor is delivering his weekly order of beer to the store. With a case of beer holding the door open so that he may enter and leave with his handtruck uninhibited. The evaporator fans are pulling air from outside the conditioned space over them. The hot moist air is causing a heat load on the evaporator higher than it was designed for. You can see in the situation above that the unit will seem to be operating low on refrigerant; however, as soon as the door is closed and the unit operates as it was designed to do, the sight glass will clear. What would happen to the excessive amount of refrigerant in the system if it had been charged during the above example? The unit would be overcharged and eventually, damage and failure would occur. If an ammeter is used, and it reads maximum amperage for the unit, there is something else wrong with the unit besides a low refrigerant charge. 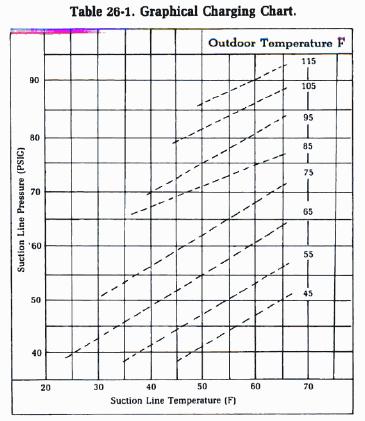 View all posts by sam